Screw-down Crown vs. Push/Pull Crown... Which One is Better for Me?

In addition to the fact that the crown can be a beautiful design element of a watch, it is the link between the inside of a watch, i.e. the movement, and the outside world. It basically has two functions for mechanical watches; Set the time / date / day and manually wind the movement. In addition to the case back and glass, the crown is also one of the critical points where water can enter. In fact, it is often the point at which this happens, because only the crown is used regularly and is therefore subject to more mechanical wear and tear than the other openings. Tinkerers and watch manufacturers have come up with a number of solutions to provide a secure seal of the crown. Two of them have prevailed; the screw-down crown, and the push/pull crown. What are the differences and which crown is the right one or you?

First of all, consider that both a screw-down and push/pull crown is not guaranteed waterproof when set to the open position. "Open" means that it is in the position where the time / date / day can be set. If you forget to screw down or push in the crown, water can enter.

A conventional crown can be moved freely and is sealed with O-rings. All manufacturers also lubricate the sealing rings with silicone oil or grease in order to minimize friction during use. Pull/push crowns seal a watch securely up to 200 meters and more - so they are not less waterproof than a screw-down crown. In contrary, the thread does not wear out, meaning that a Pull/push crown, in theory will stay waterproof longer than a Screw-down crown.

Advantages and disadvantages of a Push/pull crown:

- if you forget to push the crown in before using in water, water can enter the movement

- If the crown gets tangled under water and pops out, water enters the movement

The concept of the screw-down crown was not invented by Rolex, but was first used by Rolex in 1926 in an Oyster case. Hans Wilsdorf, the Rolex owner, actually bought the idea from the two inventors Georges Peret and Paul Perregaux. On October 18, 1926, the screw-down crown was legally protected by Rolex. To date, the concept is the most widespread crown protection against water. The principle is simple: the tube of the watch ends in a screw thread, the counterpart of which is located on the inside of the crown. Here too, O-rings are used for sealing, with only one difference. In the screwed state, one of the rings is pressed against the tube. With diving watches, this serves an essential function - which hardly anyone is aware of and which has nothing to do with water resistance: a screw-down crown cannot be operated accidentally. Underwater, correct observance of decompression and diving times is essential for survival. A wrong time indication could be fatal. For a watch that is not used for professional diving with an oxygen bottle, however, a screw-down crown could be regarded as overkill. In addition to that, some owners tend to exaggerate a little when screwing down the crown and do so with more torque than is required, which can damage the seals and the thread.

Advantages and disadvantages of a screw-down crown:

+ is waterproof when in the screwed-down position

- if you forget to screw-down the crown before using water, water can enter the movement 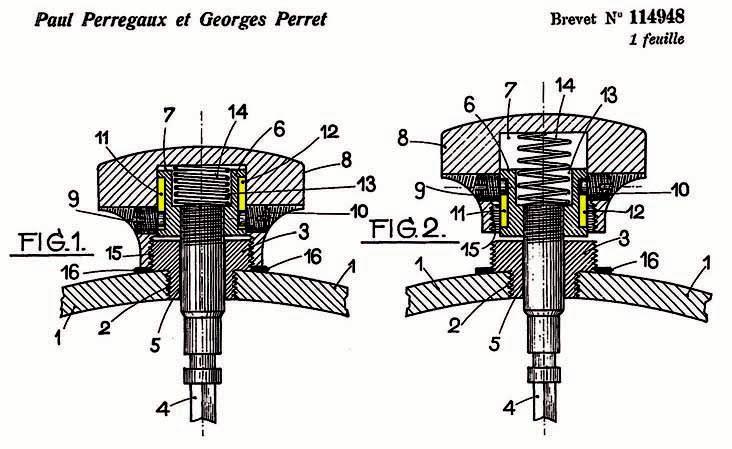 Seen here is the patent for the early screw-down design by Perregaux and Perret. The part marked 16 is the seal, located on the outside of the case. Image © David Boettcher

“For all our watch models, except our diver timepieces, we use a Push/pull crown with multiple seals through O-rings. This ensures the greatest possible safety, reliability and convenience when operating. I personally take them down to depths of 30m+ and we even periodically test the waterproofness with the crown in the pulled-out position. However, it is still advised to push your crown all the way in before jumping in the water after changing time, date or day. It also doesn’t hurt to bring your watch to your local watchmaker every year to ensure its waterproofness. It only takes a few minutes and gives you piece of mind".

I wanted to introduce you to two further solutions to make the crown waterproof:

As is so often the case, war led to special technical requirements. Combat swimmers during World War II required waterproof watches. A particularly creative solution came from America, and was first manufactured by Hamilton in 1941. The concept consisted of an additional cover in the form of a screw cap, which was screwed over the normal crown. This technology was also used in Russia, and the diving watches of the Slatousk watch factory were equipped with it. However, neither the comfort nor the aesthetics were conducive to bringing this solution to the masses.

Initially, the first Panerai diving watches, called Radiomir, were fitted with screw-down crowns. However, the very slim design made the crowns sensitive to strong impacts. In 1942, the Italian brand launched a new product: an additional protective bracket around the crown, which was also equipped with a locking lever to press the crown onto the case. The design has become a classic amongst watch enthusiasts, who gladly accept the fact that this mechanism is anything but practical for manually winding the watch.

Of course, there are other brand-specific systems to keep the crown tight: In 2002, with the new edition of the Master Compressor series, Jaeger-LeCoultre presented the variant of side protection around the crown that can be turned as a key by 180 degrees. At the end of the 1990s, the Swiss brand Gevril presented a UCI - Unlocked Crown Indicator. A colored marking on the edge of the dial indicated whether the crown was screwed-down securely. The system could not prevail, especially since it was already clear at the time that the screw connection made little sense outside of professional diving watches. More and more watch fans at that time already owned a sizeable watch collection and those who change their watch frequently will appreciate the practicality of a push/pull crown.

When it comes to the question "screw-down crown or push/pull crown", maintenance should also be considered. Because in addition to the seals, the threads inside the crown and on the tube are prone to wear out. After a few years, both components usually have to be replaced, which drives up the costs of service. If the crown is not screwed down, either an exchange of the sealing rings or the complete crown is sufficient. The tube of an push/pull crown only needs to be replaced in the event of extraordinary impact or fall damage. All in all, the push/pull crown has been able to hold its own for a long time - even at depths that the majority of human beings will never venture to.